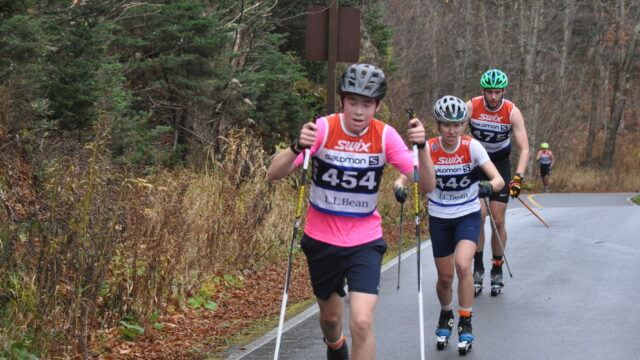 It was an unseasonably warm and humid morning last Sunday, as competitors started to show up around 8am at the base of Mt. Greylock. Besides EMXC, the field included some of the strongest New England teams, including the SMS juniors, GMVS, and Craftsbury GRP, not to mention college racers from Harvard and Williams.

We held a pre-race team meeting covering the complex logistics of the point-to-point race. Short course racers had to take a shuttle to the start of their race, partway up the mountain. Long course racers were mentally preparing for the mixed-gender wave start format that was new this year. And everyone had to think through what gear they'd need to send to the finish line at the top, versus what gear to bring with them at the starting line.

Just as it was time to warm up, a rain shower came through, resulting in some very slow and wet pavement during the race. The course climbs incessantly, perfectly designed to get harder---both mentally and physically---as the race goes on. The fog and gusty rain that greeted finishers at the top of Mt. Greylock presented a memorable final challenge and made for some very wet clothes on the ride down. Back at the bottom of the mountain while for results to come out, we luckily got to do something we're great at, i.e. hang out inside Mass DCR facilities.

We had some great, gritty performances as a team, with skiers on the podium for each of the the short and long course juniors races, including three out of four junior winners! In the short course, Fran and Leigh topped the podium with finishes less than 15 seconds apart. Will (1st) and Calvin (3rd) represented us on the short course boys podium with some very strong skiing.

Calvin charging his way to 3rd place in the short course.

Sid approaching the 3k to go mark in the short course.

Ivan throwing down some double pole in his last race before leaving for SMS Winter Term.


In the long course junior girls, Evie took the top spot followed by EMXC alum Elizabeth Graziani. And in the long course junior boys, Sam just edged out a GMVS skier to nab 3rd place behind Fin Bailey and Tabor Greenberg. Unfortunately, an apparent snafu with timing meant that Sam didn't get recognition for his 3rd place result at the podium ceremony, but we know it's an accomplishment! Notably, Sam (5th overall in long course men) and Evie (6th overall in long course women) finished in front of the vast majority of the college skiers in their respective races.

Ethan and Elizabeth working together to knock minutes off their previous course PRs.

Emily on the final pitch approaching the finish.

Andrew crushing his first rollerski race, just 12 hours after his final soccer game of the season!

Evie, en route to a junior girls victory on the long course.

Ian with just over 4k remaining in the long course.

It was really exciting to see ALL our athletes putting their minds to tackling a long, tough course in non-ideal conditions. You looked good! It's clear the team's been training. Well done, and thanks to our fleet of parent drivers who made the logistics of the race possible!